There are a lot of engineers who have never been involved in the field of statistics or data science. But in order to build data science pipelines or rewrite produced code by data scientists to an adequate, easily maintained code many nuances and misunderstandings arise from the engineering side. For those Data/ML engineers and novice data scientists, I make this series of posts. I'll try to explain some basic approaches in plain English and, based on it, explain some of the Data Science basic concepts.

There are many distributions, but here, we will be talking about the most common and used ones. But first, we need to understand probability functions for continuous random variables.

In this section, as the title suggests, we investigate probabilistic distributions of continuous random variables, i.e. random variables whose support contains an infinite range of possible outcomes. 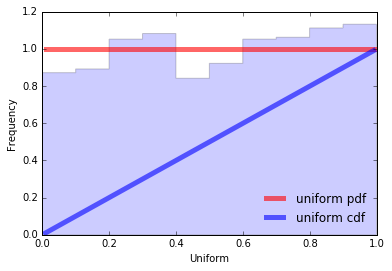 So, a continuous random variable x has a uniform distribution, denoted U(a, b), if its probability density function is: At the heart of the statistics lies the normal distribution, known to millions of people as a bell-shaped curve. It is a two-parameter family of curves that represent plots of probability density functions:

It looks a little scary, but we'll get it all figured out soon enough. The normal distribution density function has two mathematical constants:

And two parameters that set the shape of a particular curve:

And, of course, the variable x itself for which the function value is calculated, i.e. the probability density.

The constants, of course, don't change. But parameters are what give the final shape to a particular normal distribution.

So, the specific form of the normal distribution depends on 2 parameters: the expectation (µ) and variance ($#σ^2#$). Briefly denoted by $#N(m, σ^2)#$. The parameter µ (expectation) determines the distribution center, which corresponds to the maximum height of the graph. The variance $#σ^2#$ characterizes the range of variation, that is, the “spread” of the data.

Another interesting detail of this distribution is when we calculate the standard deviation we find that:

Why is this distribution so popular? Not all phenomena are measured on a quantitative scale of type 1, 2, 3 ... 100500... Not always a phenomenon can take on an infinite or a large number of different states. For example, a person’s sex can be either a man or a woman. The shooter either hits the target or misses. You can vote either "for" or "against", etc. Other words reflect the state of an alternative feature (the event did not come). The upcoming event (positive outcome) is also called "success". Such phenomena can also be massive and random. Therefore, they can be measured and make statistically valid conclusions.

Experiments with such data are called the Bernoulli scheme, in honor of the famous Swiss mathematician, who found that with a large number of tests, the ratio of positive outcomes to the total number of tests converges to the probability of the occurrence of this event. The Poisson distribution is obtained as a limiting case of the Bernoulli distribution, if we push p to zero and n to infinity, but so that their product remains constant: n*p = a. Formally, such a transition leads to the formula

Poisson's distribution is subject to many random variables that arise in scientific and practical life: equipment breaks, the duration of maintenance work performed by working staff, printing errors, the number of goals scored by the football team.

There are many theoretical distributions: Normal, Poisson, Student, Fisher, Binomial and others. Each of them is intended for analysis of data of different origin and has certain characteristics. In practice these distributions are used as some template for analysis of real data of similar type. In other words, they try to impose the structure of the chosen theoretical distribution on real data, thus calculating the characteristics that are of interest to the analyst.

More precisely, theoretical distributions are probabilistic-statistical models whose properties are used to analyze empirical data. Something like that is done. Data are collected and compared to any known theoretical distributions. If there are similarities, the properties of a theoretical model are transmitted to the empirical data with the corresponding conclusions. This approach is the basis for classical methods related to the hypotheses testing (calculation of confidence intervals, comparison of mean values, verification of parameters' significance, etc.).

If the available data do not correspond to any known theoretical distribution (which usually happens in practice, but for some reason, nobody cares), it is not recommended to use the selected template (probabilistic-statistical model). Illegal use of parametric distributions leads to the situation when an analyst searches for keys not where he has lost them, but under a street lamp pole where it is light. To solve this problem, there are other approaches related to using non-parametric statistics.