There are a lot of engineers who have never been involved in the field of statistics or Data Science. But in order to build data pipelines or rewrite produced code by Data Scientists to an adequate, easily maintained code many nuances and misunderstandings arise on the engineering side. For those Data/ML engineers and novice Data Scientists, I've made this series of posts.

I'll try to explain some basic approaches in plain English and, based on it, explain some of the basic concepts in Data Science.

One of the basic concepts in statistics is an event. Events are simply results of experiments. Events can be certain, impossible, or random.

A certain event is an event that as a result of an experiment (the execution of certain actions with a certain set of conditions) will occur in 100% cases. For example, a tossed coin will certainly fall(on the Earth conditions).

Impossible event — an event, as the name implies, that will not occur as a result of the experiment. For example, a tossed coin will fly in the sky — this is an "impossible" event.

And finally, an event is called a random event if the event may or may not occur as a result of the experiment. There should be present fundamental criteria of randomness in such an experiment. A random event is a consequence of random factors which influence cannot be predicted or such predictions can be extremely difficult. For the coin toss example, random factors are the shape and physical characteristics of the coin, the strength/direction of the throw, air resistance, etc. These are factors that are extremely hard to predict. 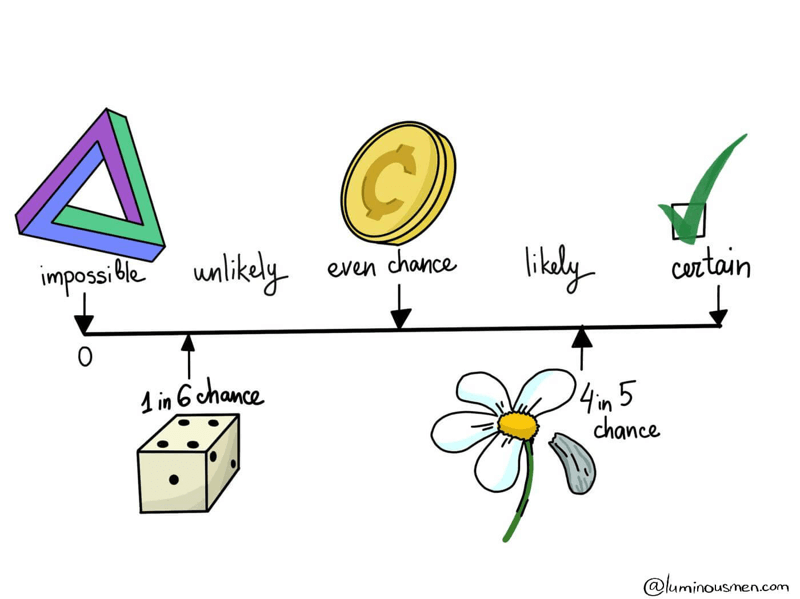 Let us consider in more detail the flip of a coin (meaning a fair coin — a coin in which both results ("heads and tails") are equally likely). There are 2 mutually exclusive outcomes — heads or tails. The outcome of the flip is random since the observer cannot analyze and take into account all the factors that influence the result. What is the probability of heads? Most answer ½, but why?

Let's name A the event that came up as tails. Let the coin be thrown n times. Then the probability of event A can be defined as:

This is called the frequency of event A in a long series of tests.

Example: there are 4 Kings in a deck of 52 cards. What is the probability of picking a King?

Number of ways it can happen: 4 (there are 4 Kings)

It turns out that in various test series the corresponding frequency for large n is fluctuating around a constant value P(A). This value is called the probability of event A and is denoted by the letter P — an abbreviation for Probability.

The probability lies in the range [0, 1], where, in general, 0 indicates the impossibility of the event, and 1 indicates certainty. The higher the probability of an event, the greater the likelihood that an event will occur.

Example: What is the probability of drawing a Jack or a Queen from a well-shuffled deck of 52 cards?

If we have 4 Jack and 4 Queen cards, the probability is simply the sum of the individual probabilities.

Probabilities of independent events should be multiplied to get the total probability of the occurrence of all of them.

Example: What are the chances of getting heads 3 times in a row?

Number of ways it can happen: 1

On the other hand, knowing that the first card drawn from a deck is an ace does provide useful information for calculating the probabilities of consecutive draws. So, the probability of drawing yet another ace is going to be 3 over 51, instead of 4 over 52 because we know that we already remove one of the aces from the deck. You can think about that in your next poker game.

Disjoint  events cannot happen at the same time. A synonym for this term is "mutually exclusive".

For example, the outcome of a single coin toss cannot be a head and a tail, it can be either head or tails.

The not disjoint event can happen at the same time. Therefore they can overlap, and the probability of overlapping should be excluded from total probability to avoid double counting.

Example: What is the probability of drawing a Jack or a Red card from a well-shuffled deck of 52 cards?

Several ways it can happen: 4 (there are 4 Jacks) and 26 (there are 26 Red cards). But there are 2 Red cards overlap between them. Two red jacks that fit both criteria. 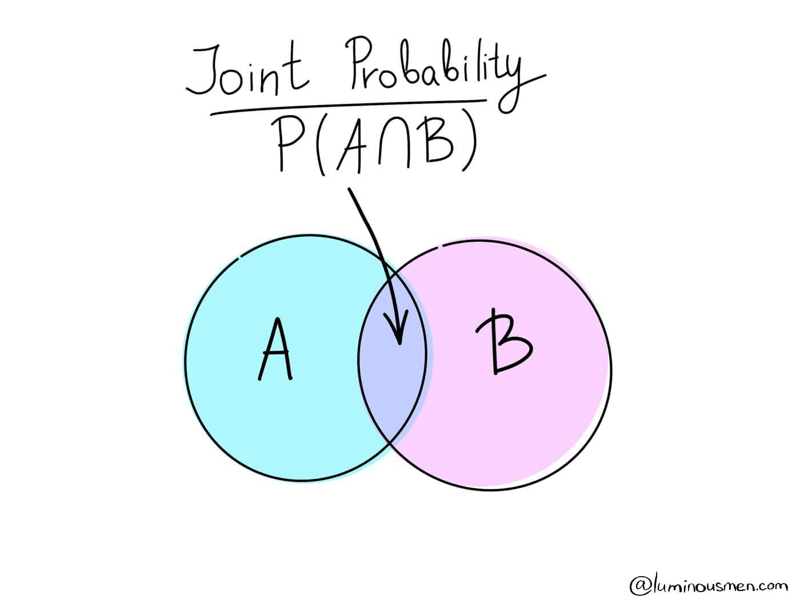 The symbol "∩" in joint probability is an intersection. The probability of occurrence of an event A and an event B is the same as the intersection of A and B sets. Venn Diagram is perhaps the best visual explanation for that.

Marginal probability — a probability of any single event occurring unconditioned on any other events.

Whenever someone asks you whether the weather is going to be rainy or sunny today(without any conditional or prior information), you are computing a marginal probability. Conditional probability — is a probability of an event given that (by assumption, presumption, assertion, or evidence) another event has occurred.

In this post, we got acquainted with the basic concepts of probability and probability algebra. In the next post, we will talk about the Bayes theorem and look at the world through the eyes of Bayes.