What is Serverless Architecture and what are its benefits? 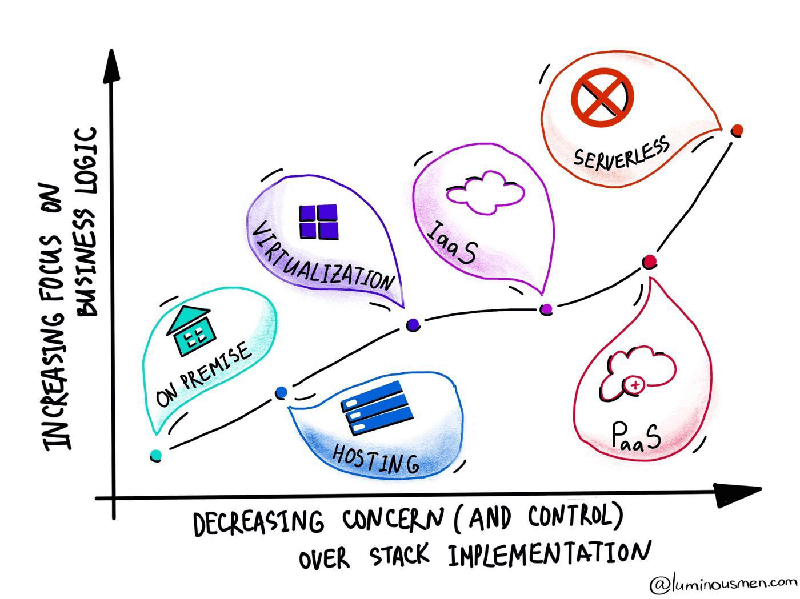 The activity of web applications is uncertain, sometimes they serve a huge number of workloads and sometimes they sit idle without many requests. Whether the application is running or not, you need to pay for resources. To solve these problems, you have to solve a lot of operational problems using not the most trivial methods. Managing all this in large enterprises is difficult, and in pet projects, it makes zero sense. But with the rise of serverless architectures, it becomes much easier.

This is a way of deploying a service without deploying the actual server. We take our function(or any other serverless service) defined in one of the supported languages, we send this function to the cloud and it runs there in a sandbox that the cloud provides us. How that function called, how sandboxes can be reused, etc., depends on the cloud provider and is subject to change.

Even though this method is called "server-less", it is not really a lack of a server, we just don’t have a dedicated server.

There are disadvantages to the serverless architecture, of course — there is no silver bullet.

One of the market leaders of FaaS services today is AWS. AWS has a specific definition for Serverless — Serverless Application Model or SAM. It is CloudFormation-compliant resource templates for applications. Under this definition in AWS falls a huge set of services for building systems of varying degrees of load and complexity, some of which have the Serverless tag — functions (Lambda), queues and stream processing (SQS, Kinesis), notifications (SES, SNS), integration (EventBridge, Step Functions), storage (S3), databases (DynamoDB), data processing (Glue, Athena). In essence, Serverless creates a separate layer of abstraction for you, removing the operational burden of working with the services.

For example, with the AWS Glue service you are not allowed to work with the ETL engine itself - instead, you declare the data transformations, specify the data source and destination, as well as define the task. Everything else is out of your hands and control.

It's about the same with AWS Lambda. The easiest way to start with Lambda is to deploy it in the Amazon administrator interface. Amazon has an interface for everything, they even have their own built-in code editor. You write a function there. The function should receive an event that contains information about the request and a context that contains some information about the runtime. There are no abstractions here, Amazon doesn’t enforce using yet another meaningless DSL, you can use native Python here or any other supported language.

By creating a function, you can create an endpoint for that function in the same AWS interface. You must enter the AWS Gateway, where you can create an endpoint with a couple of mouse clicks and bind that endpoint to the desired lambda function. All requests that come here will be passed to the function and will be served by this function. However, when you add more resources, it is obvious that the headache of connecting them will increase.

AWS Lambda automatically scales as needed, depending on the requests received by the application. Thus, allowing you to pay as you go. If your code is not called, no fee will be charged.

For me, the disadvantage of this platform is pricing. In the case of RDS databases and ECS Fargate tasks where payment is by the second, with Serverless you pay for volume (gigabytes of data stored in S3) and utilization (requests and traffic). Although they give you a detailed description of what was charged and their price calculator, I often surprised at the pricing. Various internal data transfers, usage of S3 buckets, Lambda calls, data transfers between different availability zones, even if you have everything in one zone. Amazon charges a fee for all this, a small fee, but you should never forget about it.

Let's start with what we have now. So we have monoliths, we have microservice architecture, and now cloud providers are openly pushing Serverless.

Monolith holds a large set of functionality for different business structures. Microservices are just pieces of a monolith, each covering its own domain either completely or partially (i.e., multiple microservices per domain), communicating with each other via API, RPC, or MQ.

One of the main advantages of monolith applications is performance, microservices have relative ease of development and speed of delivery.

In the case of a serverless infrastructure, we take that infrastructure that Cloud Service Providers offer us and connect those services that already have some kind of logic. You write a function that takes what came to the web server and places it somewhere in the database or somewhere else and we build a lot of these little bridges. Our application now is a grid of small pieces. Smaller than microservice because microservice approach requires as to have a completely separate such resources as persistent storage, queues, etc. This way, the code is not the backbone of the application but is a glue that binds the various infrastructure components.

Not every application is suitable for Serverless architecture. This thing won't become a standard, it's not the next step in technology, it's not a holy grail, but it still has a very, very good niche that it fills. Fail cheap is what competitively "sells" Serverless. I don't need as many resources to test an idea as I would need to deploy a small cluster of VMs. Speed is not the most important factor here.