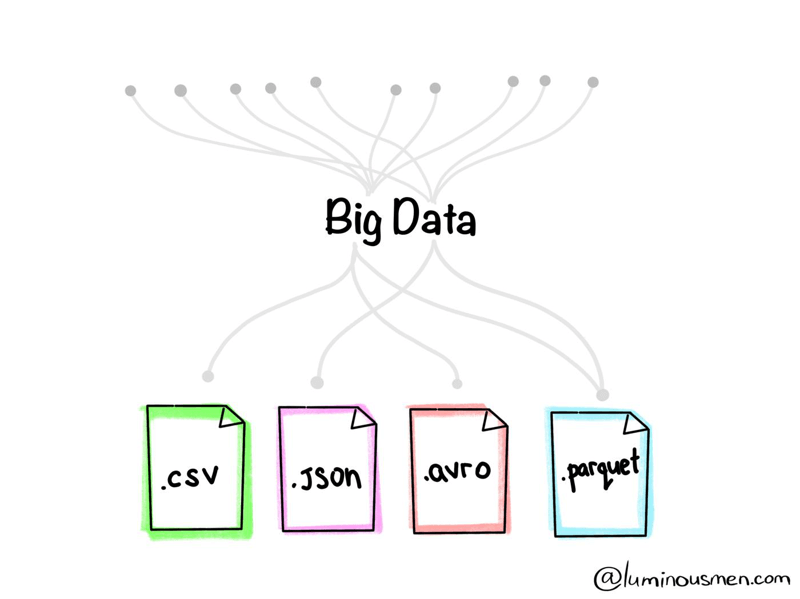 In this post, we will look at the properties of these 4 formats — CSV, JSON, Parquet, and Avro using Apache Spark.

CSV files (comma-separated values) are usually used to exchange tabular data between systems using plain text. CSV is a row-based file format, which means that each row of the file is a row in the table. Essentially, CSV contains a header row that contains column names for the data, otherwise, files are considered partially structured. CSV files may not initially contain hierarchical or relational data. Data connections are usually established using multiple CSV files. Foreign keys are stored in columns of one or more files, but connections between these files are not expressed by the format itself. In addition, the CSV format is not fully standardized, and files may use separators other than commas, such as tabs or spaces.

One of the other properties of CSV files is that they are only splittable when it is a raw, uncompressed file or when splittable compression format is used such as bzip2 or lzo (note: lzo needs to be indexed to be splittable).

Despite limitations and problems, CSV files are a popular choice for data exchange as they are supported by a wide range of business, consumer, and scientific applications. Similarly, most batch and streaming frameworks (e.g. Spark and MR) initially support serialization and deserialization of CSV files and offer ways to add a schema while reading.

JSON (JavaScript object notation) data are presented as key-value pairs in a partially structured format. JSON is often compared to XML because it can store data in a hierarchical format. Both formats are user-readable, but JSON documents are typically much smaller than XML. They are therefore more commonly used in network communication, especially with the rise of REST-based web services.

Since many data is already transmitted in JSON format, most web languages initially support JSON. With this huge support, JSON is used to represent data structures, exchange formats for hot data, and cold data warehouses.

Many streaming packages and modules support JSON serialization and deserialization. While the data contained in JSON documents can ultimately be stored in more performance-optimized formats such as Parquet or Avro, they serve as raw data, which is very important for data processing (if necessary).

Since the data are stored in columns, they can be highly compressed (compression algorithms work better with data with low entropy of information, which is usually contained in columns) and can be separated. Developers of the format claim that this storage format is ideal for solving Big Data problems.

Unlike CSV and JSON, parquet files are binary files that contain metadata about their contents. Therefore, without reading/parsing the contents of the file(s), Spark can simply rely on metadata to determine column names, compression/encoding, data types, and even some basic statistical characteristics. Column metadata for a Parquet file is stored at the end of the file, which allows for fast, single-pass writing.

Parquet is optimized for the paradigm Write Once Read Many (WORM). It writes slowly but reads incredibly quickly, especially when you only access a subset of columns. Parquet is good choice for heavy workloads when reading portions of data. For cases where you need to work with whole rows of data, you should use a format like CSV or AVRO.

Advantages of data storage in the parquet:

The basic idea of predicate pushdown is that certain parts of queries (predicates) can be "pushed" to where the data is stored. For example, when we give some filtering criteria, the data storage tries to filter out the records at the time of reading. The advantage of predicate pushdown is that there are fewer disk i/o operations and therefore overall performance is better. Otherwise, all data will be written to memory, and then filtering will have to be performed, resulting in higher memory requirements.

This concept is followed by most DBMS, as well as big data storage formats such as Parquet and ORC.

When reading data from the data storage, only those columns that are required will be read, not all fields will be read. Typically, column formats such as Parquets and ORC follow this concept, resulting in better I/O performance.

Apache Avro was released by the Hadoop working group in 2009. It is a row-based format that has a high degree of splitting. It is also described as a data serialization system similar to Java Serialization. The schema is stored in JSON format, while the data is stored in binary format, which minimizes file size and maximizes efficiency. Avro has reliable support for schema evolution by managing added, missing, and changed fields. This allows old software to read new data, and new software to read old data — it is a critical feature if your data can change.

Avro's ability to manage scheme evolution allows components to be updated independently, at different times, with a low risk of incompatibility. This eliminates the need for applications to write if-else statements to handle different versions of schema and eliminates the need for the developer to look at old code to understand the old schema. Since all versions of the schema are stored in a human-readable JSON header, it is easy to understand all the fields available to you.

Since the schema is stored in JSON and the data is stored in binary form, Avro is a relatively compact option for both permanent storage and wire transfer. Since Avro is a row-based format, it is the preferred format for handling large amounts of records as it is easy to add new rows.

* JSON has the same conditions about splittability when compressed as CSV with one extra difference. When “wholeFile” option is set to true (re: SPARK-18352), JSON files are NOT splittable.

In order to somehow compare the formats with each other, I created a set of tests using Netflix dataset. This is a so-called narrow data set — it consists of only three columns and a lot of rows.

All the tests were run on my laptop (I won't show you the characteristics, I think they are irrelevant for comparison) using Pyspark 2.4.3 with spark-submit running. The experiments were done 3 times for each format used and then averaged. Test scripts are publicly available: here.

The main function of any file is to store data. For the Big Data field, it is necessary to store large volumes of different data types for different purposes. How much this data takes up space will be easily converted into money they will cost. 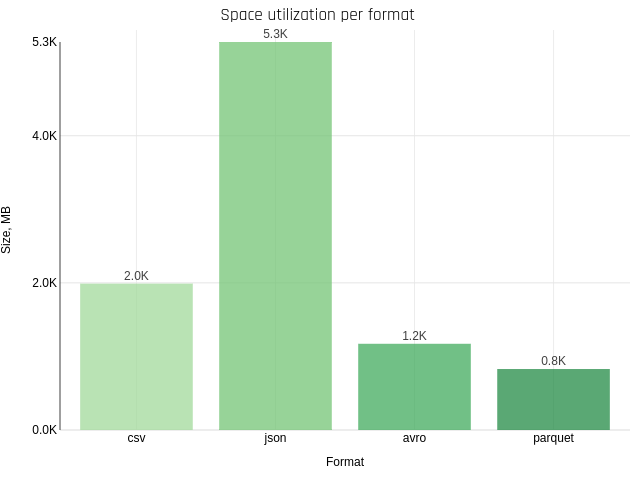 Note that the entire default configuration was used and compression was not used anywhere. I admit that an aggressively configured gzip for CSV file can take up no more than 1.5 GB. Thus, the advantage of binary formats will not be so dramatic.

The obvious conclusion — do not use JSON to store the raw data.

Next, I tried to save data in various file formats and calculate the latency. 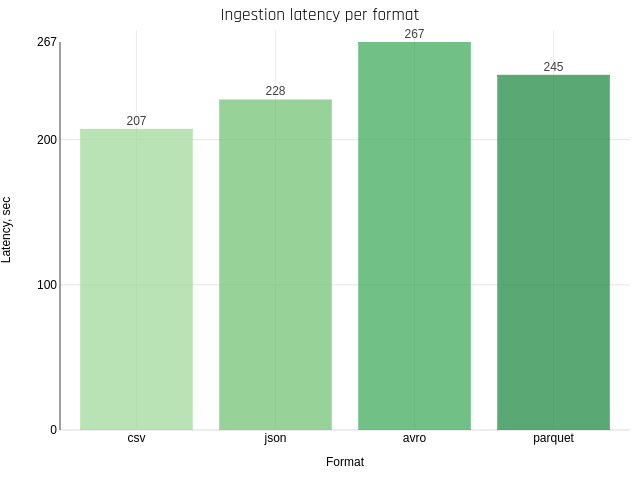 It may turn out that in most cases it is a matter of reading 2 gigabytes of source data and everything else takes 5-10 seconds (I have not checked Spark's user interface). Anyway, the result is clear — plain text will always be easier to write than encoding and gathering metadata for more complex formats (such as Avro and Parquet).

In this test, I try to understand the latency of obtaining records by providing a record identifier (using a 'sample'). 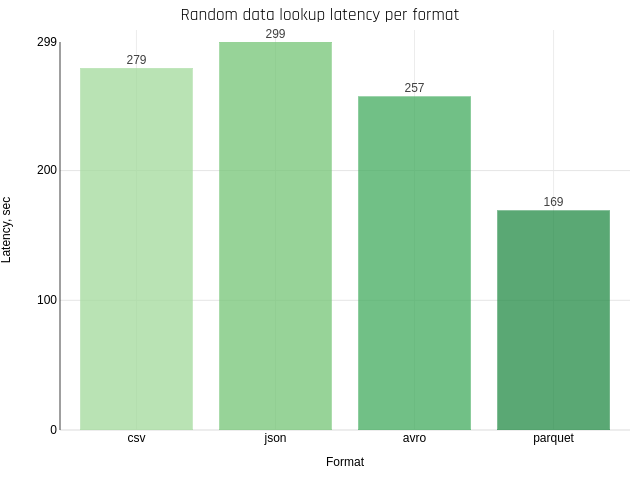 An individual record, stored in CSV, JSON, and Avro formats, can only be got by brute force scan throughout the data partition. In Parquet, the columnar nature of the format allows scanning partitions relatively quickly. Thanks to the projection and predicate pushdown the input dataset is significantly reduced.

This test shows how quickly we can calculate the statistics of frequently used columns (min',max', `count'). 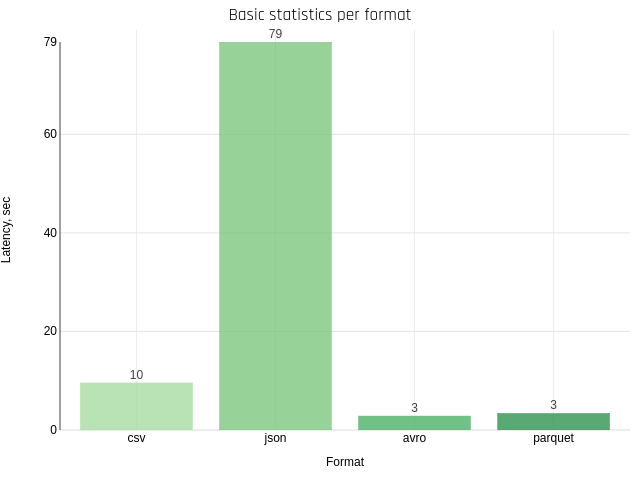 Parquet and Avro use their own hack method when reading metadata is enough to get statistics. For CSV and JSON the situation is worse — they must parse every byte. 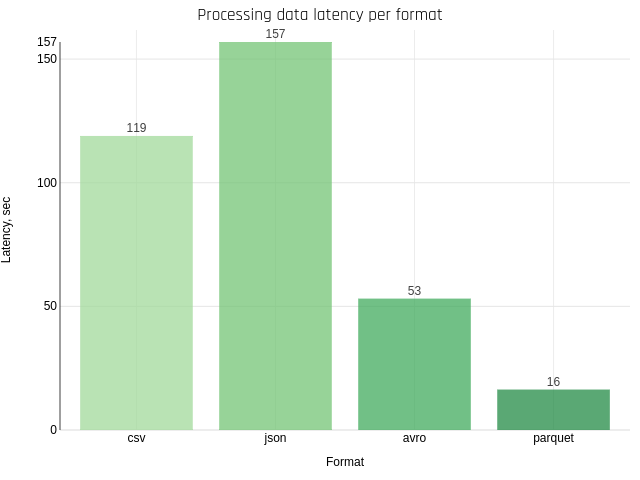 Understandably, formats that have data types inside of them can handle the work faster.

Grouping by column, per format

This test uses a more complex transformation — grouping by columns. 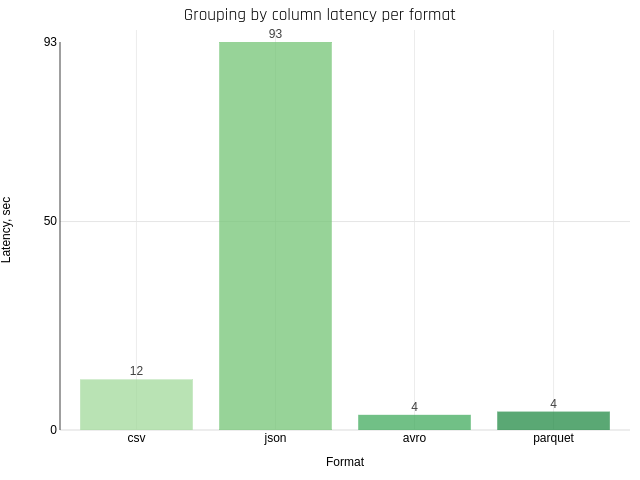 It's obvious that formats that don't need to parse columns can do it faster.

Get distinct values, latency per format

This test will try to measure the latency of getting distinct values in the column. 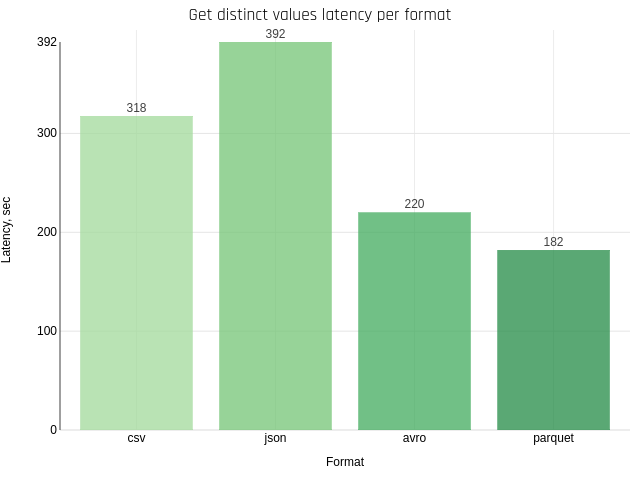 The result looks exactly the same as in a random data search, but the operation distinct significantly complicates the task. For simplicity, we can assume that it adds a reduce phase to the task, which means that the overhead costs of data exchange between executors are also measured.

Tip. Columnar formats are typically used where several columns need to be requested rather than all columns as their column-oriented storage design is well suited for this purpose. On the other hand, row-based formats are used where all fields in a row need to be accessed.

This is why Avro is usually used to store the raw data because all fields are usually required during ingestion. And Parquet is used after preprocessing for further analytics because usually all fields are no longer required there.